The Guide-A-Key team, comprising Emma Herbert, Seamus Hurley, Eoin Considine, Eamonn Browne & Diarmuid Curtin impressed the MetLife LifeChanger Award jury. Their combination of a passionate focus on social issues and determined commitment to sustaining a viable business through strong financial performance proved to be a winning formula. Guide-A-Key designed and manufactured a device, which helps people with limited dexterity to insert a key into a lock. The device is affixed to the area around the keyhole, allowing the user to simply slide their key into the top part of the device, which then guides the key into the lock.

Presenting the award, April Hawkins, Assistant Vice President, MetLife Foundation, said: “The MetLife LifeChanger Award recognises the student company that best embraces social impact, financial performance and innovation. Guide-A-Key delivered a viable business plan for today’s challenging markets, while demonstrating benefit to their local community, ability to be profitable and competitive, as well as innovation in their field. We are proud to play a role in supporting young people to get ahead in life. Through the MetLife LifeChanger initiative, MetLife Foundation and MetLife volunteers are helping thousands of students in building critical financial, work readiness and entrepreneurship skills.”

“It is great to have received the MetLife Life Changer Award, but the most important part is having been able to develop a simple device that can make a positive change in people’s lives. The JA Company Programme has been an amazing experience from start to finish, and we’ve been able to learn so many new skills along the way” reflected Diarmuid Curtin Guide-A-Key team member after receiving their award.

Over 350 COYC participants gathered in Berlin, Germany, between 28-31 July to compete with the best student entrepreneurs from across Europe. 37 teams representing 36 countries participated.

Glück Guide A Key! Off to Berlin 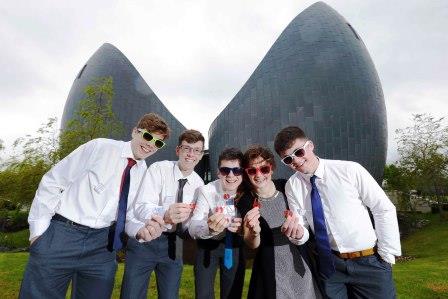 After an intense two days of competition the judges eventually opted to choose ‘Guide a Key’, the team from Desmond College, Newcastle West, Co. Limerick as the Junior Achievement Company of the Year 2015. The team designed and manufactured a simple solution to assist people with limited dexterity to insert their keys into locks. The device is affixed to the area around the keyhole; the user simply slides their key into the device, which then guides the key into the keyhole. ‘Guide a Key’ will now go on to represent Ireland at the JA Europe Company of the Year Competition in Berlin in July competing against 39 other teams from across Europe.

The judging panel comprised Eoghan Stack, CEO, DCU Ryan Academy, Julie Spillane MD Accenture Global Services, Padraic O’Neill MD & Site Lead Pfizer Ringsend & Mark Groves, Assoc Director PM Group. The panel was very impressed with the performance of the students across each element of the competition and had a very tough decision to make. The team from Limerick came out on top based on the combined scores given to the company’s business plan, the excellence of the work at the trade stand, the quality of their interview and the poise and professionalism of the business pitch and presentation in front of a large invited audience.

Lisa McKittrick is Director of Finance with responsibility for financial management and strategy, fundraising and project management. In keeping with the organisation’s core values and as a Chartered Management Accountant, Lisa is committed to ensuring full transparency and accountability so that resources raised, invested and controlled by JA are effectively deployed in achieving the organisation's aims, encouraging young students to complete their education and realise their full potential.

As Director of Development, Ann is predominantly involved in raising resources for JAI via new corporate support and educational projects.  Ann liaises with JA Worldwide on new programme content and foundation opportunities which ensures JAI’s menu of programmes/workshops remains relevant. A graduate of UCD with a BA (Hons) in History and Politics and Diplomas in Marketing and PR she came to JA in 1999 having volunteered for JA while working in 3M Ireland.  Ann is committed to ensuring that all JA programmes are delivered to the highest standard, that volunteers and schools are fully supported resulting in each student having a meaningful experience.

Clodagh is Director of Operations and enjoyed several years experience working across the Financial and Professional Services sectors before coming to JAI in 2007. A Project Management Professional, Clodagh has a Masters Degree from DCU in Work and Organisation Behaviour and Post Grad in Business Administration from UL. Clodagh has responsibility for the internal development of JAI and its people and ensures that the quality of services provided across the network to all stakeholders is consistent with JA high standards.