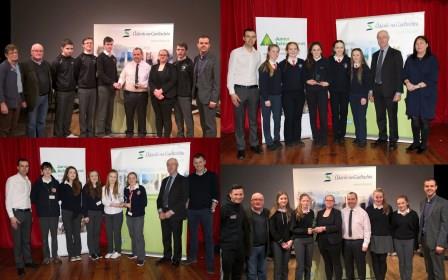 Four emerging enterprises founded by local students in the Mayo and Galway Gaeltacht areas have been crowned regional finalists of the Údarás na Gaeltachta - Clár Comhlachta.

Clár Comhlachta is a hands-on business learning experience developed and delivered in partnership with Junior Achievement Ireland (JAI) and is taught by business volunteers through the Irish language to students in Gaeltacht regions.  500 Transition Year students from Gaeltacht regions in Cork, Galway, Donegal, Kerry, Mayo, Meath & Waterford have participated this year and challenged themselves to create, operate and manage their very own business!

Following intense days of competition in both Mayo & Galway the following four entreprises; 'CPA Woodwork' from Coláiste Pobail, Acla, ‘Cluasáin Clúdaithe’ from Scoil Mhuire, Béal an Mhuirthead, Blas de Chonamara  from Scoil Phobail Mhic Dara, Carna and Cothú Cinnte from Colaiste Chroi Mhuire from An Spiddeal were chosen to progress and represent their region in the National Final of the Údarás na Gaeltachta – Clár na gComhlachtaí.

‘Cluasáin Clúdaithe’ produced and designed a fish bone shaped earphone holder that you can wrap your earphones around in order to stop them from tangling! It is made of perspex plastic which makes it extremely light and is available in many colours.

The students in ‘CPA Woodwork’ used skills learned in their favourite subject to design tea light holders from wood for various occasions. Heart shapes for Valentine's Day and Shamrock shapes for St Patrick's Day are popular sellers and they can create a shape for any occasion! 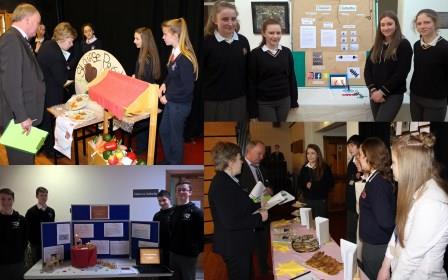 Cothú Cinnte produce hand-painted, glazed, dinner plates, depicting areas for starch, vegetables and protein. Their aim is to promote healthy eating and encourage people to include more vegetables in their diet. The areas are labelled 'as gaeilge' and customers have an opportunity to personalise the plates when placing their order!

Blás de Chonamara is a cookbook, written in Irish, which contains traditional recipes gathered from people in the parish of Carna.The students were even able to obtain some recipes from their own grandparents, which they had tested many times at home! It contains four sections: Baking with kids, Savoury dishes, Traditional dishes and Cakes.

The judging panels were thoroughly impressed with the entrepreneurial flair and particularly the level of preparation invested by the students, their teachers and business mentors to ensure they presented their enterprises in the best possible light.

It was obvious that the teams had taken full advantage of the opportunity to showcase their entrepreneurial talent. The Regional Final is a real test of nerve as each team must participate in an interview with the judging panel and also make a public presentation in front of their fellow student entrepreneurs, the judges and other invited guests. Each of the young entrepreneurs rose to the challenge of having their business acumen tested by the panel of judges and represented their schools and families with great distinction.

Údarás na Gaeltachta Regional Manager, Pádraig Ó Conghaile commented: “Údarás na Gaeltachta are proud to promote student entrepreneurship. The knowledge and enthusiasm for their business ideas shown by these students indicates that enterprise in the Gaeltacht areas is in safe hands and I would like to congratulate them all on their hard work and preparation for today’s regional final. We especially congratulate the four regional finalists and wish them all the best of luck at the National Final.”

The four winning teams will join other Regional Final winners to participate in the Údarás na Gaeltachta – Clár Comhlachta National Final which will be held in the Connemara Coast Hotel, Galway on March 15th 2017.